Today we had another appointment with Dr. E. It was just another x-ray and check up. Everything is looking good. Dylan's hips are starting to calcify and they look fantastic. Good news!! His leg length deficiency is closer to 40% shorter than his other leg now, so that has gotten worse (originally it was around 30%), which only makes us feel even more comfortable with going the amputation route. Dr. E said that as soon as we are comfortable to move forward we can start talking about what to do next. We let him know that we are comfortable with our decision and he agrees that this is the best option for Dylan. Now we just need to figure out what amputation route is the best. Dr. E feels a below the knee will work, the amputation being right at the ankle. At that time they would most likely also straighten his tibia, as it is quite bowed. There are two different types of amputations (Syme and Boyd) and Dr. E thinks the Boyd might be best for Dylan's situation since his deficiency is so great and the Boyd would add just a little extra length to the residual limb, which might be beneficial for a prosthesis. This is something that we will want to confirm with a prosthetist (the person who fits, makes, etc., the prosthetic limb(s) Dylan will be wearing the rest of his life) as he will be able to know what will work best in a prosthetic leg for Dylan's specific situation. We are going to be attending an Amputee Clinic in November (unfortunately Septembers and Octobers were already fully booked so we couldn't go sooner). There we will be talking to additional surgeons and prosthetists....who will be able to analyze Dylan's situation and come up with what they feel will be best. This is all to help us feel more comfortable by getting additional opinions. Plus, Dr. E says it is always nice, as a surgeon, to have multiple people and opinions behind him, agreeing that what we are doing is, indeed, the BEST for Dylan's specific situation. As far as time frame...Dr. E was pleased to see that Dylan is progressing developmentally. He's crawling like a pro, he's pulling himself to standing and putting weight on both legs. So he said that ideally we should do the surgery before/when he gets to a point that his foot is hindering his development. In other words, before he starts walking or right around then. So, we're now looking at surgery most likely being done in the next six months or so. We'll have another appointment with Dr. E in December, shortly after the Amputee Clinic, and my guess is that we will start making plans then as to when the surgery is going to happen. We'll have multiple opinions by then and should really know the exact direction we are going to take, so I don't see why there would be anymore hesitation. But as always, only time will tell.

The last thing discussed was the length of his femur. He said it won't be a problem for the time being. They can adjust his gait with a prosthesis. Later down the road, around age 8 or 10 or so, there might be the need to either do a lengthening on his femur to make it match his other femur, or there is the option to stunt the growth on his good leg to let his shorter femur catch up in length. But both of those would be down the road quite a few years and wouldn't affect anything that would happen now.

We are so appreciative of Dr. E and his thoroughness in this whole process. He wants to do what is best for Dylan. And we couldn't be happier with him and the way he has gone about this. We trust him and feel comfortable with him and know that he is an answer to prayers.

We left the appointment feeling really good about finally being on the road that will lead us to surgery and some sort of finality. Obviously, we know that surgery is not the end all, in fact it is really the beginning of a life long journey of other questions and things to figure out, but it will at least bring closure to all the major decision making and being in limbo about what is going to happen.

I would once again be lying if I said this was easy. In fact, I've spent most of the time writing this blog, bawling. The reality of what is actually going to happen has hit me hard all of a sudden. I still just can't believe we are talking about what we are talking about. Amputating our son's leg...who would've ever thought we would be discussing this. It's crazy. And emotional. We KNOW we are doing the right thing. We KNOW this is the best option for Dylan. We KNOW he will be fine and will live a great life and won't be hindered by this, but will be made stronger because of it. It's just the thought of what we have to do....it's hard to swallow. And now being on the road to it all actually happening just makes it all so much more real. It's actually going to happen. And it's going to happen soon. ...sigh... I can't imagine what I will be like when it gets even closer. :) I'm so grateful for a loving Heavenly Father and Savior, Jesus Christ, who knows what we are all going through and is right there with us the whole way...comforting us and bringing us peace and carrying us through those times that have and will be hard. It makes dealing with all of this so much easier.

Some pictures from our visit today. We brought Kaden today and he was so good and loved playing with all the toys at the Children's Hospital. We have such handsome boys. Molly, the nurse that always comes in with Dr. E, always comments about how much she loves Dylan and he's so cute and she was SO excited to finally meet Kaden and was pretty smitten by him too. 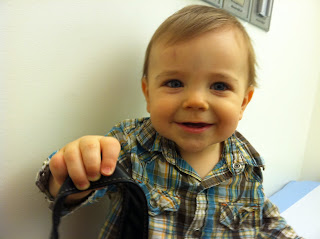 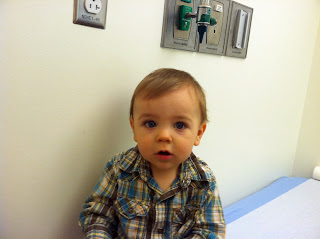 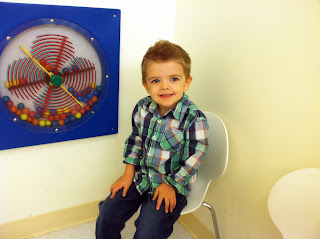 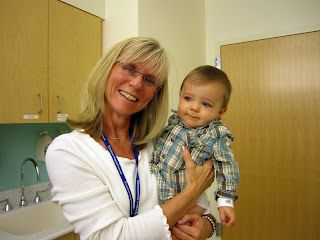 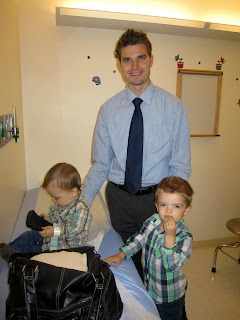 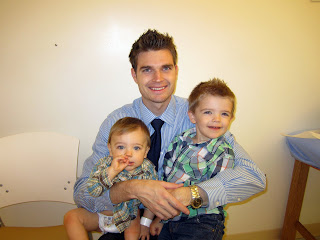 Oh, and check out Dylan standing on both legs!! So awesome! 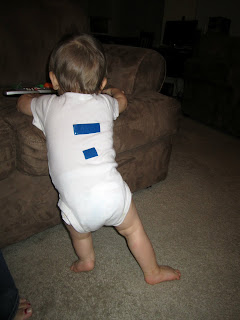 (Don't mind the blue tape on his back. Kaden did a little decorating with some duct tape.)
Posted by Katie at 6:55 PM