Our prosthetist has been asking us if we wanted to put a design on Dylan's new legs the last couple legs we've made. We've been so hesitant about putting designs on his leg for a number of reasons. We've never put designs on his leg in the past because I felt like that was something HE should be able to choose. He's now at an age that he can have an opinion and make that choice. However, he's also been at an age when his opinion seems to change every few weeks. So our main concern was that he was going to pick a design on his leg and then after a month of wearing this cool Lightening McQueen leg, or whatever he chose, he'd hate it and not want to wear this leg anymore because of the design on it. We had other concerns too. We don't believe in getting tattoos on our body and was this encouraging that in a way? I don't know!! Probably not, but I over think everything. haha! And then as a mother, I did worry that having a design on his leg would bring unwanted, extra attention to his leg. He's never had a problem with the stares and questions that he gets. And that makes me SO happy and proud to see that confidence in him that he just doesn't care. It's his leg. Whatever. That's his attitude. And a part of me could see him still not caring, but I worried that with the design, he'd get even more attention than he already does and maybe he'd start to feel self conscious about it. I worry about that, as his mother. But at the same time, I didn't want to make that a big deal to where he WOULD start thinking about that and worrying about it. So I kept my mouth shut. :)

So we've been telling him when he was 5 he could choose a design for his leg. We figured at five he'd have a better understanding that what he chooses is what he gets until it's time for a new leg. But as we were preparing for this new leg, leg #6, Dylan kept talking about how he really wanted a "cool" leg. And the bottom line is...this is Dylan's leg and if he wants a design, he should get to try a design out. Maybe he'll love it. Maybe he won't. But he and we won't know until we try. So we told him we'd go look at fabric and see if we could find something that I felt he was 100% sold on. We searched a few different stores and found a few different options but everything he was picking he'd say he liked but he didn't seem IN LOVE with. We had some Jake & the Neverland Pirate fabric and some monkey's in spaceships and some Tranformers fabric. I told him we'd go look at one more store and see if we could find anything else, otherwise, he was sold on the monkey's in spaceships (which I will be honest...was my least favorite...ha!...but he liked it and that's what mattered). Well, he really loves all things space (hence the space monkeys) and we walked by this really cool space fabric in this last store and he was like, "I WANT THIS!!" I asked if he was sure and he said "YES!! I really want a space leg!" So a space leg is what he got!! And I have to admit....it is REALLY cool looking! Our prosthetist did an awesome job and made sure to include the specific planets that Dylan wanted on the leg and it really is AWESOME looking!! Dylan is THRILLED! He couldn't wait to show off his space leg to EVERYONE we came in contact with for the next few days. It was so cute!! He still will say, "Mom, I really love my space leg! It's so cool!" It makes me happy to see him so happy about it!

Last May when he had the big surgery #2 where they broke and fixed pretty much every bone in his residual limb, one of the things they had to do was break his femur, rotate it, and then put a plate and some screws in his femur to keep it held together while the bones grew back together.


Check out the hardware in his femur! 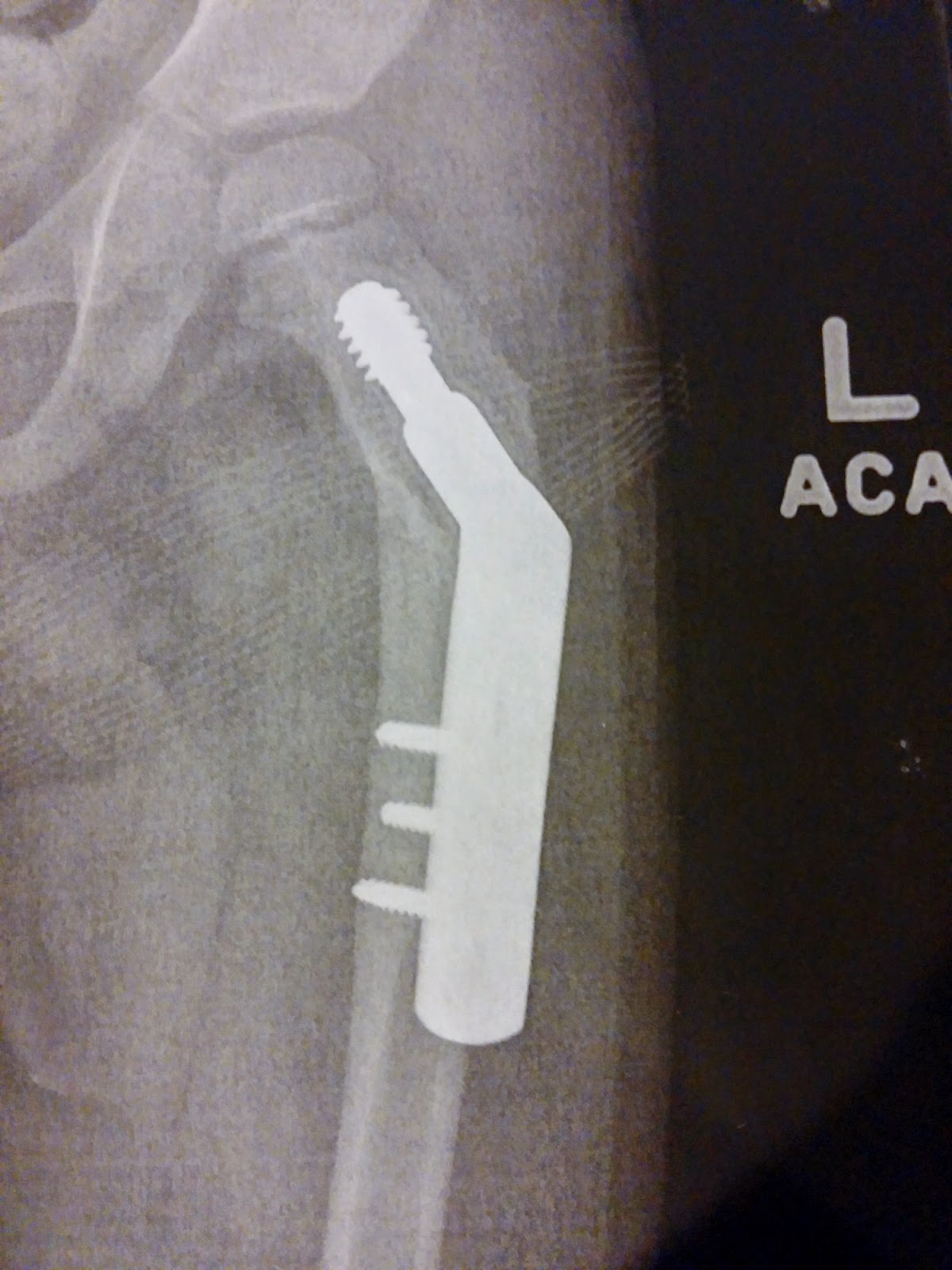 This surgery is just to go in and remove the hardware from his femur. Now that his femur is all fused back together, they don't want to leave the hardware in too long because the bone can start growing over the hardware and it's just not necessary being in there anymore. So...this should be a fairly easy surgery (comparatively speaking). We hopefully won't need to stay the night at the hospital or anything. As soon as they can get him comfortable we can leave. Recovery should be minimal. I'm sure he'll be uncomfortable for a few days, but he'll hopefully be up and walking around quickly. He's not supposed to run or jump for 4 weeks, which will be hard considering he LOVES to run and jump. But overall, we are hopeful for a much better recovery considering his past two surgeries.

Dylan is having a hard time with it, though. It breaks my heart. We've been talking about it for the last couple weeks and he has seemed to be okay with it. He's made comments about how he doesn't want to have surgery again, but after we talk about it he seems okay. Well, yesterday he overheard me talking to the hospital when they called to confirm the time and normal pre-surgery protocol and as soon as I hung up he said, "Surgery is THIS Wednesday?" When I told him yes, he started bawling saying he was so scared. All he remembers is his last surgery and it was a BIG surgery with a long, painful recovery, so when he hears surgery, I'm sure that's what he's thinking about. It makes me sad. He just wanted to be held while he cried and cried. I told him it was okay to be scared but that I knew he was going to do awesome, just like he always does. He eventually calmed down and said, "Okay, I will be brave." And I know he will. He always is. This kid is tough!! We're definitely not looking forward to this, because surgery sucks no matter how "small" the surgery is, but we know everything will be okay!

And in other life related news...since I don't update this blog very regularly...The kids are LOVING talking to and getting excited about their new BABY SISTER joining our family late summer. We all can't wait!!