I was hoping to blog all about surgery and the past few days, but I just don't have the energy to do it right now. However, I've had a lot of people asking for an update, so I thought I would at least blog a quick update for everyone.

Surgery went forth as planned on Wednesday, January 11th at 7:30 AM and was done around 10 AM. I'll blog more details about the whole day later, but the surgery went great. The doctors were extremely pleased with how it all turned out.

It was a rough 24 hours after surgery. Emotionally and physically exhausting. But we survived. :) It was hard to see our baby so uncomfortable and in pain. He cried for about 10 hours straight right after surgery, with little 5 minute cat naps here and there, and a few moments here and there where he was awake and not crying. It took awhile to get the whole medicine combination down...trying to figure out what medicines were working or what else we could try to help him be comfortable enough to relax, etc. By about 12 midnight we were finally able to get him to relax enough to sleep more than 5 minutes at a time, but he was still up frequently throughout the night.

Thursday morning around 6 AM he was starting to have more awake and not crying time, as opposed to awake and super fussy or trying to sleep and super fussy time. The medicines we were using seemed to be working. He was eating and drinking and was having good wet diapers, so around 10 AM they told us we would be going home that afternoon.

We were excited to be in our own home and figured Dylan would be happier there. He hated the IV and all the cords attached to him. Plus the beeping of the machines and the outside noise of the hospital and the nurses coming in every so often to check stats, etc. We felt like he couldn't really get good sleep there (or us) and knew if he could get some GOOD sleep he might be a little happier.

So around noon on Thursday we were discharged and were on our way. Dylan was still fussy on and off, obviously uncomfortable, but for the most part we were pretty impressed with how well he was doing just 24 hours after surgery.

{Here is Dylan right after getting home from the hospital. His poor groggy/drugged/tired eyes.} 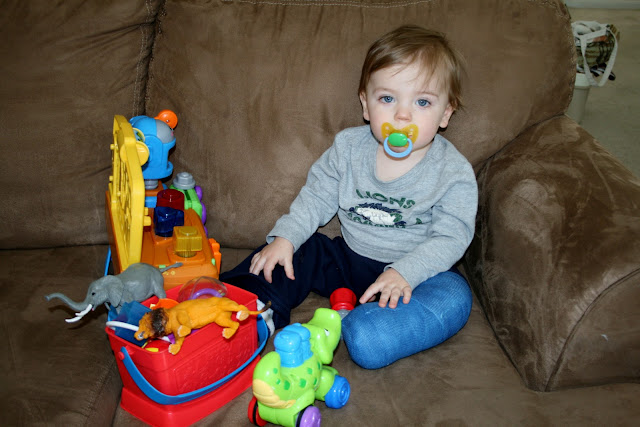 {The night we got home from the hospital, trying to play} 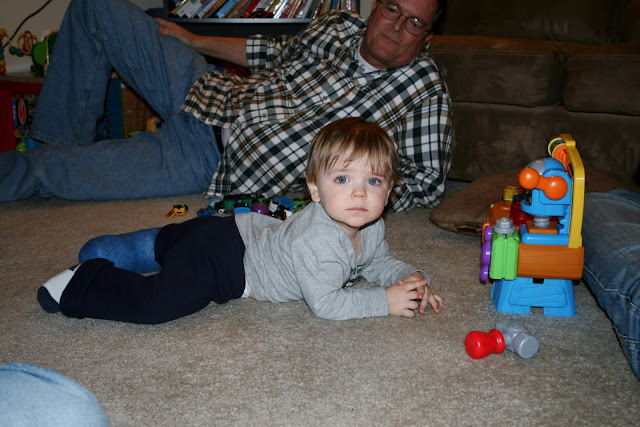 Being home has been nice. We were able to get back into a somewhat normal routine, which has helped. He is still definitely uncomfortable at times, which is SO sad to see. I think the hardest thing is seeing him get so frustrated not being able to do the things he used to be able to do. However, he is figuring things out so fast! The first day he was frustrated he couldn't crawl. He kept trying and trying (yes, this was the day after surgery...trying to crawl already!) and by that night he could do it. He is now crawling all over the place with very little extra effort. He had a hard time figuring out how to roll over again with the heavy cast in the way, etc...but has been able to figure that out. He's had to figure out how to sit up again and is working on standing, but that's still a big frustration for him. It really is amazing how quickly he wanted to just jump back into normal life. It's hard to see him frustrated and SO hard to see him in pain or uncomfortable, but he has been a champ overall through this whole thing. He's not 100% his normal self yet (his cute smiles are somewhat rare still) but we're getting there. He's proving to be the little warrior that we knew he was from the day he was born. We look forward to him continuing to become more and more like himself.

{Saturday, after a much needed sponge bath and hair wash. Keeping entertained with our spices.} 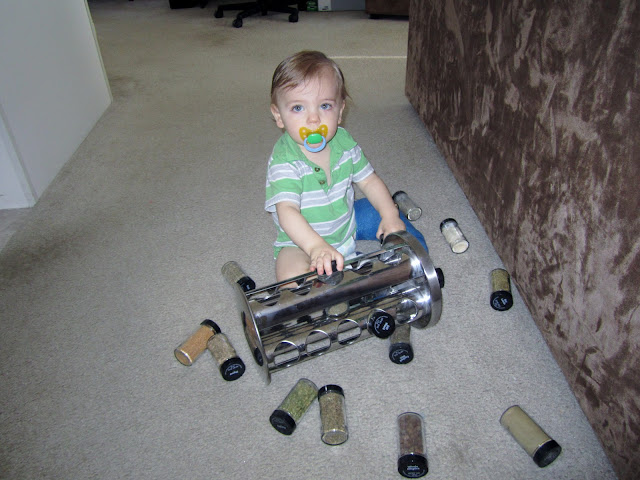 I know I've said this before, but I honestly cannot thank you all enough for the prayers and thoughts and well wishes throughout this whole process. To family, friends, friends of friends, and complete strangers...THANK YOU! I can't explain the peace my husband and I felt the day before surgery and the day of surgery. We KNOW it is because of the MANY prayers said on our behalf. We felt Heavenly Father there with us, carrying us through that day, and we felt peace. That's the best way we can describe it...peace. Even though it was hard, both emotionally and physically, overall we were really able to handle those days leading up to it and the day of, much better than we thought we would've been able to. So thank you!

Also, I can't describe how overwhelmed we have felt because of all of your willingness to help us, not only through prayer and emotional support, but through financial contributions as well. You all have been an answer to prayers that we have been saying since the day Dylan was born and the day we realized this would be somewhat of a financial burden for the rest of Dylan's life. We always knew we would figure out a way to make the money aspect of this situation work out and continued to pray for that way. YOU were, in part, that way. We had no idea my friend Ashley (at Make It and Love It) was going to do what she did. And we were BLOWN AWAY by how many people so willingly either donated money directly or bought patterns to go towards money raised by Ashley. We have received the money raised by the pattern sales and that combined with donations made directly to the fund made for Dylan will cover our portion of Dylan's surgery and his first prosthetic leg. We are in shock! It makes me tear up thinking about the sacrifices you all made for us. You have no idea how helpful this is for us. You gave us a leg up (no pun intended) with all of these medical bills. Thank you, thank you, THANK YOU!!

I promise I will blog a more detailed post about surgery with lots of pictures and what not, for those that care to hear all about it. And I will most definitely be keeping everyone updated on his progress.
Posted by Katie at 8:43 PM