Today was one of those "doh!" kind of experiences with Dylan's leg.

We were coloring this morning and at one point, Kaden put a crayon between his toes. He was pretty proud of himself and showed me, to which I couldn't resist taking a quick picture of his cute smile on my phone and telling him that was pretty cool! 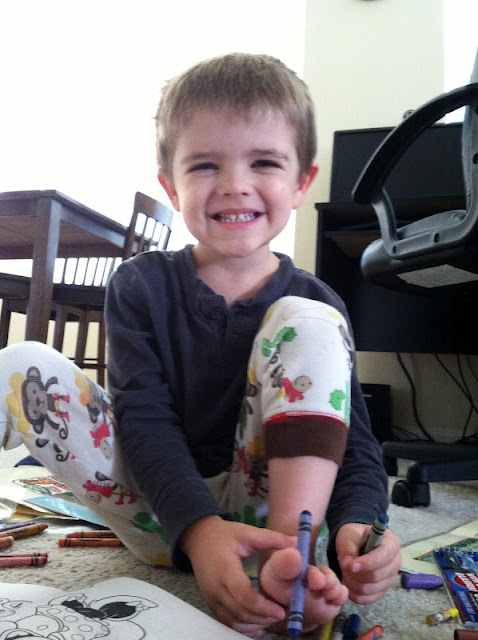 Dylan wants to be JUST like his big brother. So after seeing the reaction Kaden got from having a crayon between his toes, Dylan, too, wanted a crayon in between HIS toes. So he picks up a crayon and tries to put it between his toes. Not a big deal, you think. He does have toes that he can put a crayon between, after all. However, Dylan decided to try to put the crayon between the toes on his prosthetic leg. (I attempted to take a picture of him trying and caught a little bit of his confused look) 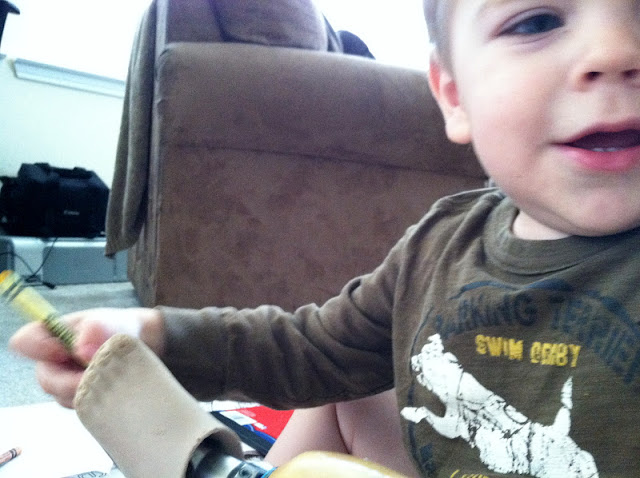 He looked over at me with this confused look on his face like, "why can't I get a crayon between MY toes??" It was sad and so cute all at the same time. Cute because he truly doesn't look at his prosthetic foot/leg as any different than his other foot/leg. He heard crayon between toes and he didn't second guess that he could put a crayon between ANY of his toes. Sad because with this attempt, it was a slight fail.

I let him try a couple times to see if he'd figure it out himself and then helped him put some crayons between his toes on his other foot and all was well. :) 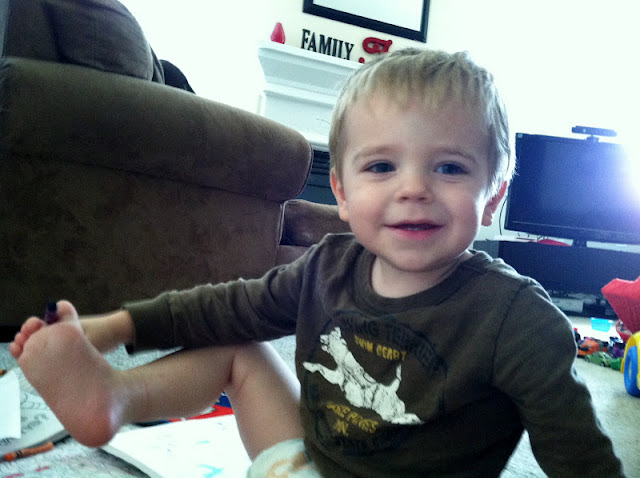 We went to the park the other day. After playing on slides and swings, we walked over to the baseball field. There were a few puddles of mud, but I didn't think much about it. Until, of course, Dylan ran right to the puddle of mud and sat in it before I could stop him. :) 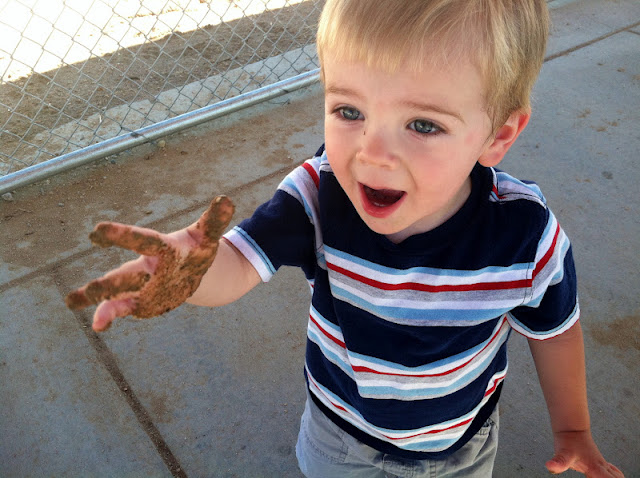 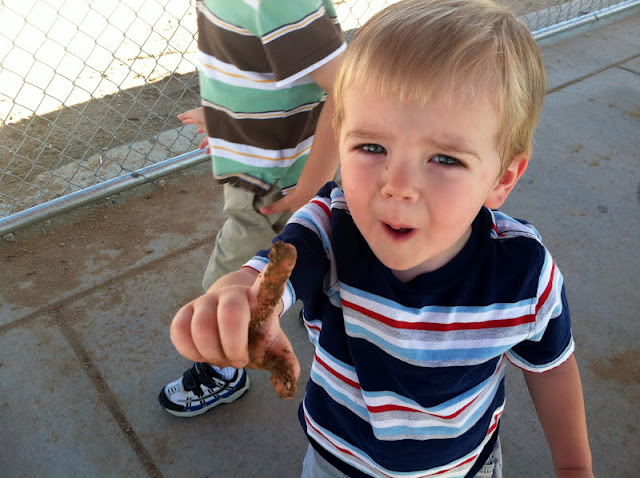 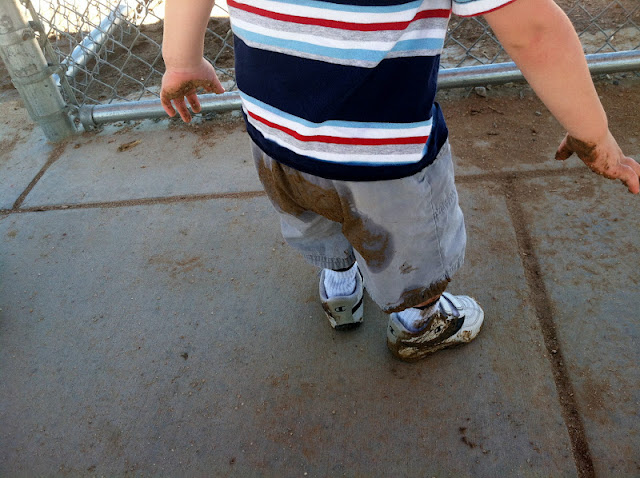 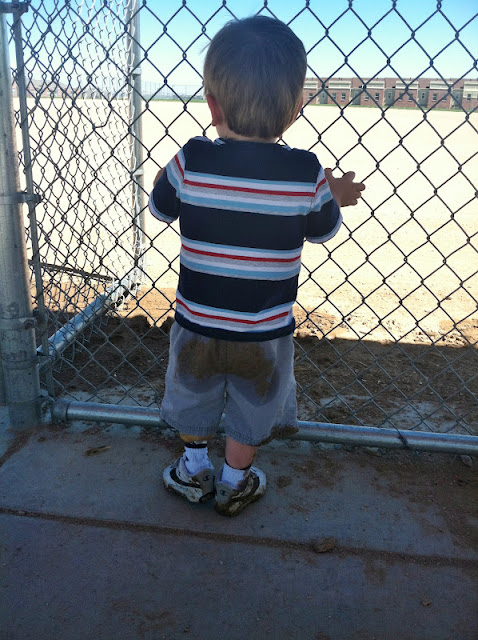 No worries...a little mud never hurt anyone. I figured it would dry quickly and we could brush it off and just take his pants and shoes off before getting in his car seat when we were ready to go home. It did dry quickly and they played a little longer and right as they were running back to me so we could leave, Dylan got a little too close to the mud puddle and slipped into the puddle, falling on his side and bum and completely covering both shoes, legs, shorts, hands. He was one messy boy! So I used the two wipes I had left in my purse (why is it that you always run out of wipes when you need them the most?) and cleaned him up as best as I could. I took all his clothes off, as well his leg and we headed to the car. My hands were full with Dylan and muddy clothes so I asked Kaden to carry Dylan's leg.

As we were walking back to the car, I turned around to see why Kaden was walking so slow and he was crouched down making Dylan's leg "walk". hahaha. Cracked me up! 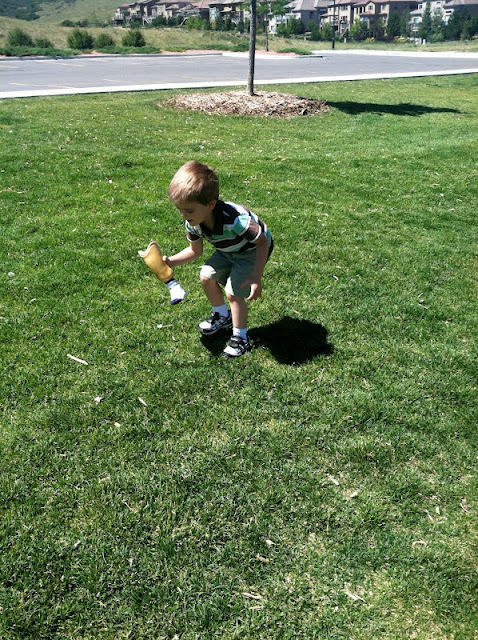 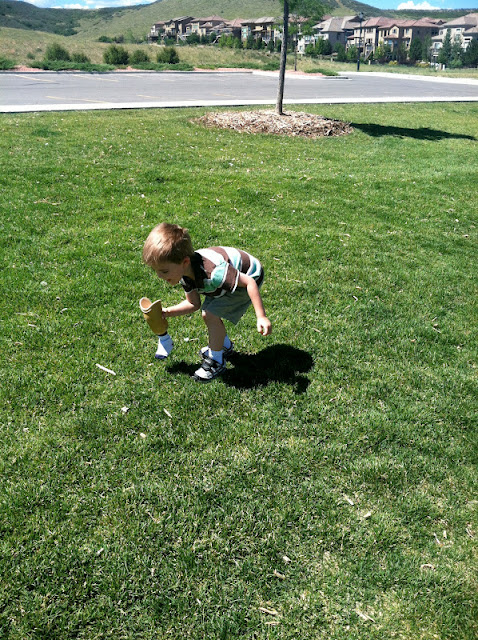 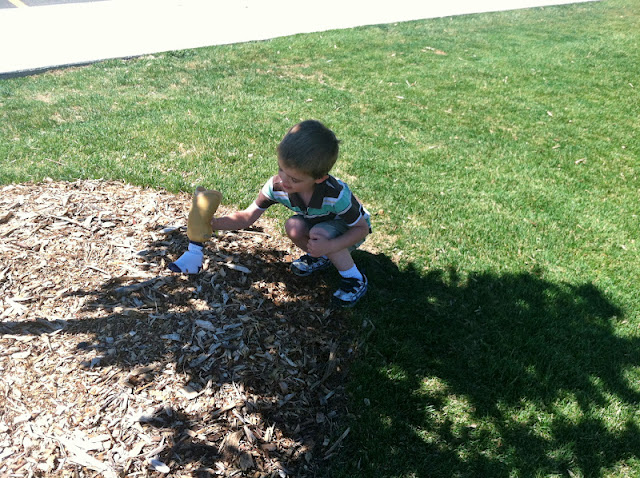