This was from an update we posted on our personal blog in March 2011:

We had another appointment with our orthopedic surgeon yesterday and it went well. I was kind of hoping that we would leave with more of a concrete idea of what the future looked like, but that didn't happen. However, we discussed a lot of things with our surgeon and had a LOT of questions answered and we have a general idea of where things are going. There are just a lot of "IF this, THEN that"s still in the mix. But we'll get there. This is a major test of patience for us, maybe more so me than Bryson...I like to plan things and having things so up in the air drives me a little crazy. :) We're just so happy to at least have a general idea of where we are going.

We are still somewhat in limbo because we still need to watch how things develop, which will determine the exact route we take. We do know, however, and we have felt this for a long time (after A LOT of prayer and thought), that the lengthening surgeries are a no go. His discrepancy is so great it would require multiple surgeries. We're talking YEARS of surgeries, starting from when he was around 4 or 5 and most likely lasting until he was 14 or 15. We would be more than willing to go through years of surgeries if we felt it was the best option for him, however, the doctor said that with the amount of lengthening that would need to be done he would have a pretty high chance of having more issues (function, pain, etc.) that would be life long after. We just don't feel it's worth the chance of him having major pain the rest of his life or not being able to be as active as he could be with a prosthetic or it not even working and having to do the amputation route in the end anyway after years of surgery. We also have a very strong knowledge and faith to KNOW that he will one day be able to run around on two "perfect" legs, it just may not be in this life. We want to give him the best life we can in this life and we feel like putting him through years and years of painful surgeries to possibly get a less than productive or painful result is not the route. The doctor even said that if it was his kid, he wouldn't do the lengthening either. So after talking with the doctor more and hearing all the possible outcomes of the lengthening surgeries we then started discussing the different amputation routes. This is where a lot of the "if this, then that" scenarios come into play. A lot depends on how his hip and knee develops. If his hip is in good shape then there are some really great options to choose from. If it's not, then things will be a little more complicated. Also if his knee is not stable there will be options to give him a better functioning prosthetic as well. With his femur being so much shorter than his other femur, that plays a big part in what can be done as well. The different options we discussed yesterday (and these aren't the final options just some of the ones that were discussed that are high candidates, again depending on so many different factors) were if his knee was good they could do a below the knee amputation and then maybe one lengthening on his femur to get it closer to the same length as the other leg so his knees would bend at about the same point. If his hip looks good, but his knee is not stable enough there is a procedure they would do called a Van Nes Rotationplasty. This is pretty crazy sounding, but it would give him the same general result as a below the knee amputation, but just in a totally crazy way. What they would do is get rid of his knee joint completely, fuse the tibia to the femur to make the femur as long as his other femur, then they would take his foot, turn it around backwards so that his heel would be like his "knee" and his ankle would act as his knee joint. Then they would fit a prosthetic to the foot. So it would be like a below the knee amputation just with the ankle acting as the knee and his foot acting as the stump. Kinda crazy. And if you google that procedure and look at pictures, it's pretty crazy looking. BUT, whatever will give him the most functionality is what we're going for and we are for whatever it will take! Then there is always the above the knee amputation, which he would be able to be active and functional, it's just a little harder than a below the knee amputation or the Rotationplasty. We didn't really even go into the options for if he has issues with the hips. Right now, it's looking promising. He has great movement and motion which is a strong indication that things are okay with his hips, but we don't know for sure because his hips are still too cartilaginous to tell on the x-rays. SO, we will be going back in in another three months or so. We are praying for good hips (please join us in this if you can). Right now it seems like a lot depends on his hips at this point. Until his next appointment, we continue to just let him be a normal baby and continue to pray for the best outcome and have faith that it will happen.

Thank you all SO much for the amazing outpouring of love, concern and support for us. We appreciate it more than can be expressed in words.

Here are some fun pictures from our appointment. Dylan was being super smiley and cute while we were waiting to get the x-rays. Unfortunately our camera didn't flash on the times when he was smiling super big and cute, but I had to include them still anyway. We did catch one small smile with a flash. :) 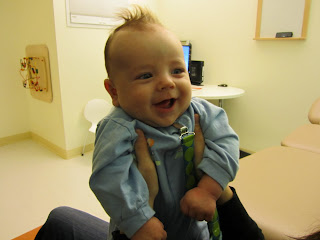 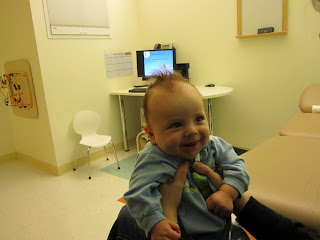 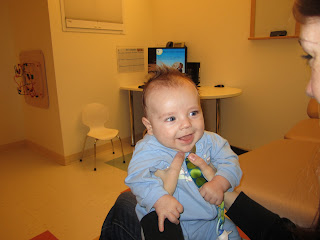 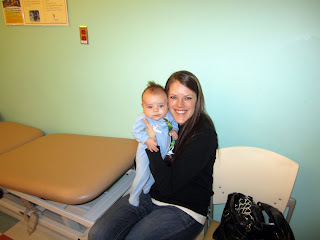 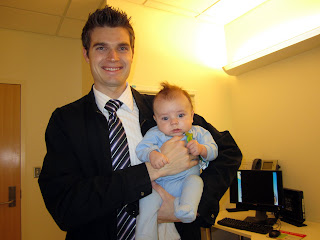 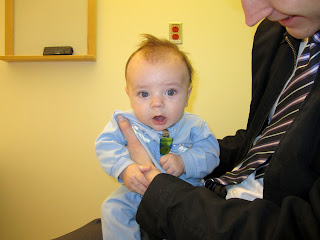 When he gets his x-rays we have to wear these big vests so we can be in the room and help hold him still and stay positioned. I'm sure the nurse thought we were the biggest nerds taking pictures but we were just having fun. :) (I realize I'm making the ugliest face and the lack of makeup doesn't help either...haha..oh well, fun times!) 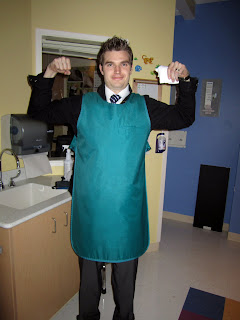 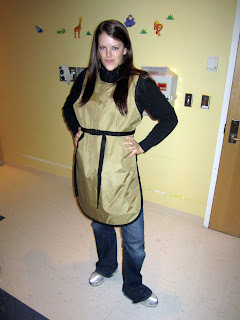 Dylan laying on the x-ray table. He was really good this time and let them pull his leg and twist it so they could get the best shots with very minimal fussing. Last time he fought it hard. :) 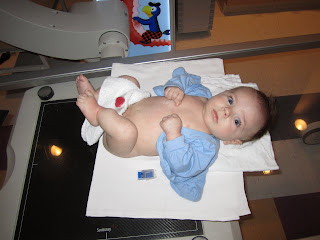 After x-rays and after the exam with the doctor he fell asleep in my arms while we discussed things with the doctor. When we went to get him dressed again and back in his seat he stayed asleep (so not like him). He must have been REALLY pooped with all the activity! :) 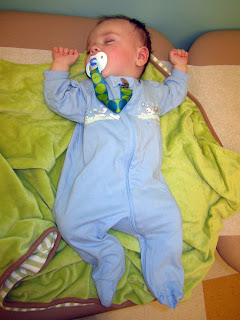